There’s nothing like a gazebo for selling merchandise and hot food at sporting events.

It’s been a slow start to the year but after the hardship of Dry January, it’s time to look forward to the start of the 2016 sporting year with the Six Nations.

The Calcutta Cup - Scotland versus England - kicks things off on February 6th. After the Rugby World Cup, much is expected on the field. But it’s off the pitch that we’re interested in as these huge sporting events provide the backdrop for many a branded gazebo.

Big games like these require a mammoth backroom effort - making sure all the spectators are well fed; that there is enough merchandise on offer around the grounds and ensuring plenty of first aid stations.

For a lot of these types of functions, our heavy duty gazebos do a great job.

Hard-wearing and able to withstand some of the worst winter weather that Edinburgh, Dublin or Cardiff can throw at them, they’re used up and down the country at all kinds of sporting events.

And our gazebos don’t just come in handy for serving up some tasty gourmet burgers outside the stadium - they’re also great for associated marketing and promotional events.

As an example we helped deliver a Pepsi Max Printed Gazebo for the 'NFL on Regent Street' event last autumn as the American football circus descended on London for a weekend.

The Six Nations may not quite be as full-on in terms of razmataz, but it’s getting there, as organisers try to fire up fans for the battle on the pitch with as much promotional activity as possible.

Away from the big international games, our heavy duty gazebos are used at a huge number of club level rugby matches - serving drinks, hot food and acting as first aid stations and so on. Of course it’s not just rugby, but all manner of sports.

For more on how a heavy duty gazebo will help you put on a great sporting event, speak to us today.

To get a quote on a printed gazebo, contact us anytime or fill in our quick & easy quote enquiry form here and we will get back you right away with some prices.

And we have more information on Custom Printed Gazebos here.

We promise to only send you good things 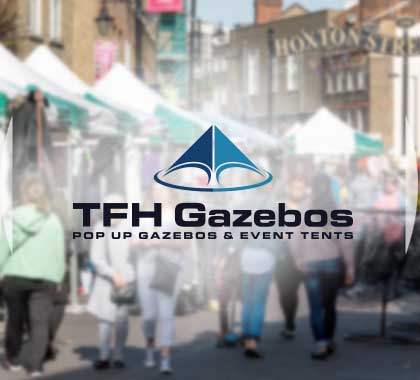 0
Recently Viewed
Sorry, there are no products.
Top